There is a unique personal letter in our archives from 1905 which covers two amazing aspects of life at Tufts at the time. Forrest Herbert Bolton wrote a letter to his friend Flossie [full name unknown] in December of that year. In his letter he reported two incidents without commenting on any possible historical connections between the two. You can read the letter by clicking on the following link:
Forrest's letter to Flossie, December 1905

In the first incidence (starting on p. 3) Forrest describes hazing between freshmen and sophomores at Tufts. A week before writing to Flossie, one freshman had been blindfolded, stripped of all clothing, covered in molasses and then sprinkled with small pieces of paper and soft snow. He then had to run across the floor blindfolded, slipped on the molasses, and was subsequently covered with even more molasses. At the end of the 'fun, the sophomores gave him a thorough scrubbing in a bath tub. While the freshmen decided in a meeting that this type of hazing went too far, Forrest does not point out that the hazing clearly echoes 'tarring and feathering' which had sometimes also been administered to Republican African Americans after the Civil War. 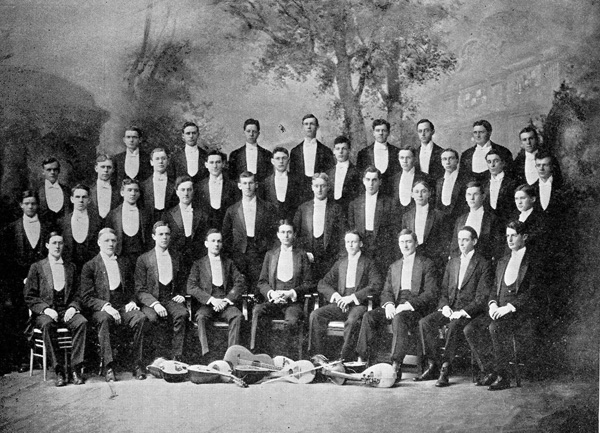 In the second incidence (starting on p. 7), Forrest tells Flossie how the Tufts Glee Club -- which at the time apparently did not include any African American students -- had performed at a local lecture given by Booker T. Washington (1856-1915) and only a week after the hazing incidence. The preeminent African American educator, author, and orator spoke on the 'Negro Question' at the overflowing Opera House in Medford while the Glee Club was invited to sit in the front row and lead the singing.