Today marks four decades since the end of the Vietnam War, a conflict in which left approximately 3.1 million Vietnamese and over 58,000 American soldiers dead.[1] The war made an impact on our entire nation and the Tufts community was no exception to this. This article will provide an overview of the war and focus on how the Tufts community responded to the conflict. 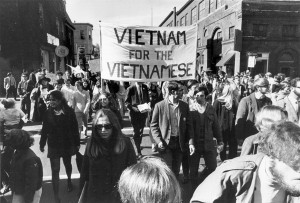 The roots of the Vietnam War lie in French colonial rule in Southeast Asia during the nineteenth and twentieth centuries. During World War II, as France fell to the Nazis, French colonies in Southeast Asia were occupied by Japanese troops. Local Vietnamese forces, led by Ho Chi Minh, developed a resistance movement to the Japanese occupation. At the end of the war in August 1945, Vietnam declared its independence, but France intended to retain the country as its own colony. As it became apparent the French were not leaving, the Vietnamese independence movement grew into a guerrilla struggle against French power. The Viet Minh, Ho Chi Minh’s guerrilla army, handed the French a series of stunning defeats, culminating in the route of French forces at Dien Bien Phu in 1954. This led to the effective withdrawal of the French and the division of the country into North Vietnam, with a Communist government in Hanoi, and South Vietnam, under the dictatorial rule of Ngo Dinh Diem in Saigon.[2]

American involvement in Vietnam dates back to the early 1950s, when U.S. military advisors aided the French colonial authorities. The American troop presence in Vietnam escalated greatly during the John F. Kennedy administration, ballooning from several hundred advisers under Eisenhower to 16,000 troops by the time of Kennedy’s assassination.[3] In 1964, Lyndon B. Johnson further escalated troop deployments in Vietnam after the Gulf of Tonkin attacks on American forces, which declassified documents later revealed may never have actually occurred.[4] At this point, the Vietnam conflict escalated into full-scale war, as American forces conducted systematic bombings in North Vietnam; by 1968 there were over 500,000 U.S. troops on the ground in Vietnam.[5]

In April 1965, Henry Cabot Lodge, then U.S. Senator and former Ambassador to Vietnam, delivered a hawkish speech at Tufts, declaring that a Communist victory in Vietnam would have grave consequences. Like JFK, he opposed withdrawal of American troops from Vietnam and called for continued military support of the government in South Vietnam.[6]

Opposition to the war by the Tufts community also began as early as 1965. An article in the Tufts Weekly of February 19, 1965 describes students’ participation in an antiwar rally on the Boston Common that drew 250 people.[7] At this point opposition to the war was still relatively small, both at Tufts and throughout the country. In 1965, there was still a general sense among the American people that military action in Vietnam was necessary, but public opposition to the war would grow into a mass movement as the 1960s progressed.[8] 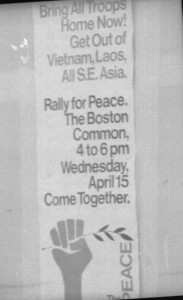 A chapter of the radical student organization, Students for a Democratic Society (SDS) was formed in the fall of 1964. It would become one of the largest organized opponents of the war on the Tufts campus, in addition to other groups such as Young Socialist Alliance and the Committee to End the War in Vietnam. In March 1967, SDS brought Henry Aptheker to campus to speak as part of a national “Spring Mobilization to End the War.”[9] In the fall of the same year, students protested against the CIA and Dow Chemical Company, both of which had come to campus to recruit students. In the following year, the Student Council voted to ban military recruiting on campus, but Tufts President Burton Hallowell would not concede to this demand.[10]

The spring of 1970 was perhaps the pinnacle of antiwar activity on the Tufts campus. Antiwar events, such as a Dave Dellinger speaking engagement in March and an activist planning meeting in April, consistently drew hundreds of students. After Nixon’s April 30 announcement that the United States would be undertaking military action in Cambodia, protests erupted on campuses around the country. National Guard troops were even deployed on a number of campuses in an attempt to curb the protests. In Ohio, National Guard troops killed four people at Kent State University on May 4th, triggering a nationwide student strike that included approximately four million students, including many at Tufts. (On May 15, police killed two protesters at Jackson State, a historically Black college in Mississippi). Tufts students set up a strike center on the main campus and held rallies to protest the war and violence against protesters. The protests led to the effective cancellation of final exams, even though the University did not officially close.[11] 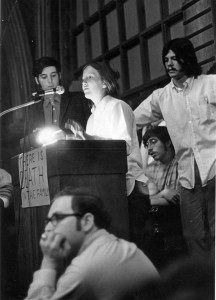 In addition to protests against military recruiting and the shootings at Kent State and Jackson State, the Fletcher School also became a target for antiwar activists’ ire. The most extreme example of this was firebombing of Dean Edward Gullion’s office in March 1971. Gullion felt as though he had been personally targeted by radicals because of his political views about Vietnam; though antiwar activists were suspected, the motivation behind the attack is unclear to this day because the perpetrators were never caught. Tufts SDS condemned the action as “absolutely indefensible” in a statement they released following the bombing.[12]

By and large, Tufts student protests against the war were peaceful. The main tactics were rallies, demonstrations, and teach-ins. In addition to events at Tufts, students participated in antiwar events off-campus as well. The Observer publicized a Boston Winter Soldier event, where returning veterans talked about their experiences in the war, in October 1971.[13] The following month, Tufts students participated in an antiwar rally organized by the Student Mobilization Committee (SMC) in Somerville.[14] Antiwar activities on-campus continued and intensified in the spring of 1972, culminating in student strikes in April and May of 1972.[15]

Public pressure on the Nixon administration and resistance within the U.S. military to the war pushed the country towards a peace deal.[16] The United States brokered the Paris Peace Accords of 1973, which stipulated peace terms and a timeline for the withdrawal of U.S. military forces in Vietnam. Fighting still raged after the signing of the accords and it wasn’t until the end of 1973 that most American forces finally left Vietnam. The U.S. continued to supply military aid to the regime in South Vietnam, but this too was eventually scaled back. In March 1975, the North Vietnamese Army launched a final push that would lead to the surrender of the South Vietnamese government.[17] Surprisingly, the fall of Saigon on April 30, 1975, which ended the war between North and South Vietnam, passed without mention in pages of the Observer.

By the end of the war, over 58,000 American soldiers had died in Vietnam, including six Tufts alumni.[18] On November 13, 1984 a plaque was dedicated to these soldiers at the top of the Memorial Steps, inscribed with the quote: “In Remembrance of Those Members of the Tufts Community Who Served During the War in Southeast Asia.”[19]

To learn more about the Vietnam War at Tufts, you can visit us to view our historical collections at Digital Collections and Archives (DCA). We are located on Level G of the Tisch Library and our Reading Room hours are Monday-Friday, 9:00AM-3:30PM, except university holidays. You are welcome to make an appointment or ask any questions by sending an email to archives@tufts.edu.