A Grave for Gravity: How Tufts Pranksters “Helped” with Anti-Gravity Research

Here at Tufts DCA, we’ve recently installed our Fall 2016 Exhibit, Tufts Traditions: Then and Now. It showcases a number of student traditions over Tufts’ history, including many that are no longer practiced on campus today. We had a lot of traditions to choose from, and we decided to put a few bonus ones on the blog.

A Grave for Gravity: How Tufts Pranksters “Helped” with Anti-Gravity Research

If there was ever a time and place to commit minor vandalism in the name of science, Tufts University in the 1960s would be it. Inspired by an unusual campus monument, anonymous Tufts students attempted to send gravity to its grave, and the monument along with it.

The Gravity Stone was a gift to Tufts from Roger Babson, founder of the Gravity Research Foundation. He donated the monument in 1961, along with a monetary gift. By Spring of 1962, a tradition had already emerged around the Stone. Students dug a hole and pushed the Stone into it in order to see whether or not it succumbed to gravity. With no means to retrieve the 2000-pound Stone from the bottom of its grave, the students buried it. Tufts administrators initially decided it was best to “let sleeping monuments lie,” in part because they believed “that a similar occurrence would take place before the academic year was over,” but also because many students and faculty had been outspoken regarding the unscientific language of the Stone’s inscription. Tufts Building and Grounds workers eventually resurfaced the monument sometime in the early seventies, and it was continually moved by students and the administration until the Stone vanished in 1977. 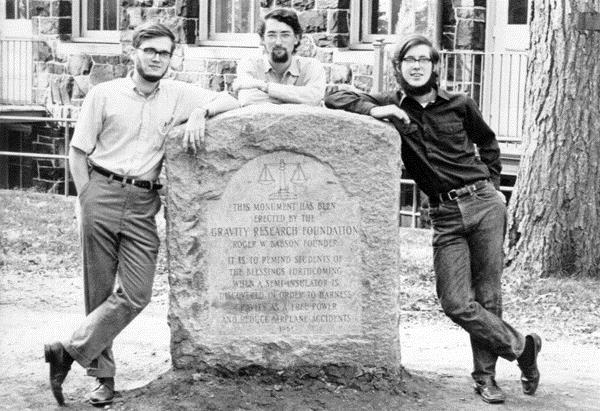 The tradition is almost as eccentric as the circumstances it arose from. Babson’s interest in anti-gravity research began after his grandson tragically drowned, which Babson attributed to the forces of gravity. After predicting the 1929 stock market crash and investing accordingly, he had the means to fund his research interest and donated a significant amount of stocks to universities across the country. At Tufts, stock was to accrue until 1999, at which point the total value was to be donated toward anti-gravity research. This gift was accompanied by the Gravity Stone, which reads:

“This monument has been erected by the Gravity Research Foundation… It is to remind students of the blessings forthcoming when a semi-insulator is discovered in order to harness gravity as a free power and reduce air plane accidents.”

Campus newspapers reveal that it has been a curiosity since its arrival on campus, likely due to its tombstone-like appearance and odd inscription. 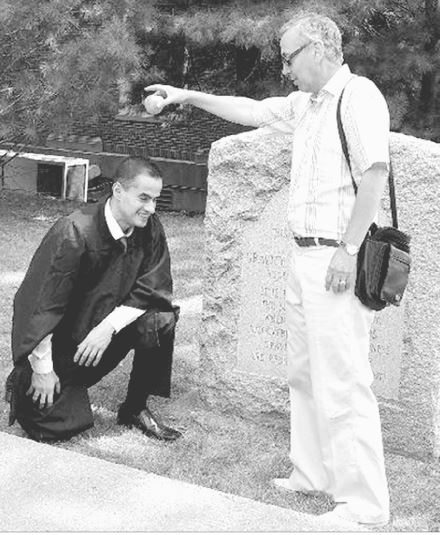 After its mysterious disappearance, the Gravity Stone was finally returned to the spot between Goddard Chapel and Eaton Hall sometime in the late 1980s, where it remains today. It seems that the grave-digging tradition has gone by the wayside, but a new quirky tradition has emerged in its place. Degree ceremonies for Tufts Institute of Cosmology now take place in front of the Stone, where faculty drop apples on the heads of graduates in order to emulate the moment Newton discovered the theory of gravity. Though students are no longer using it in their experiments, the Gravity Stone continues to inspire Tufts graduates to think about gravity in new ways.