Between 1969 and 1987, the Delta chapter’s charter was held in trust after members refused to participate in recruitment activities to protest the discriminatory recruitment rules of the Tufts Panhellenic Council. Perhaps summoning the inclusive spirit of their sisters, after a transgender student rushed the Delta chapter and Alpha Omicron Pi International— which oversees recruitment activities of all chapters— delayed an affirmation of the bid, more than half of Delta's members left the sorority in October of 2016. The remaining members discussed leaving the national organization, but instead decided to push for a change in its policy on transgender students, resulting in a change to the bylaws in 2017 that opened membership to “women and those who identify as women."

On December 11, 2017, the national Executive Board of Alpha Omicron Pi withdrew the Delta chapter's charter, citing "the chapter's inability to 'build their membership to sustain a viable AOII membership experience.'” In May of 2018, remaining residents moved out of the Delta chapter's sorority house at 25 Whitfield Road in Somerville, and donated their records to DCA. The Alpha Omicron Pi Records provide a glimpse into the activities of the national sorority, as well as a picture (actually, lots of pictures, in many scrapbooks!) of what life was like for a member of the Delta chapter at Tufts.

Neatly preserved at the Delta’s most recent residence were 57 years’ worth of issues of To Dragma (translated as "the sheaf"), the official magazine of Alpha Omicron Pi. Often over 100 pages, these issues include interesting features such as a roll of active and alumni chapters, articles about and photographs of chapters across the country, alumnae notes by chapter, and directories of officers and committees for the national organization. 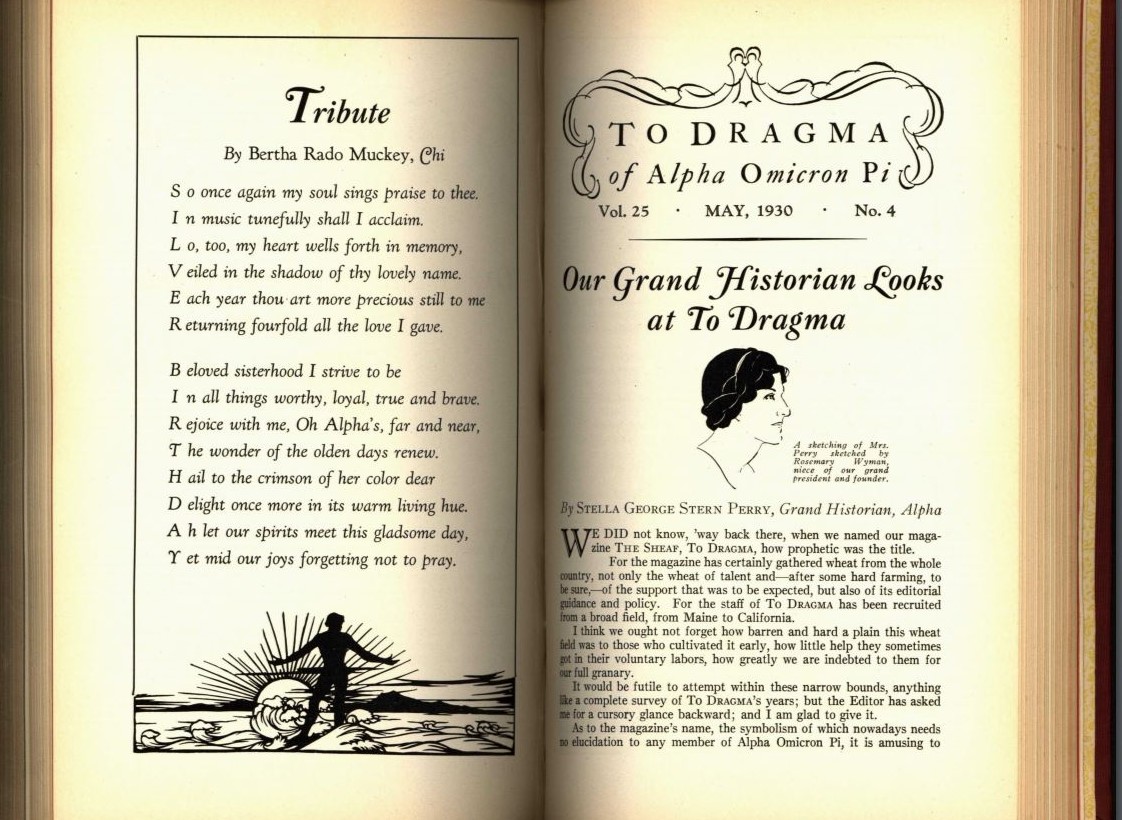 Housed with these bound copies of the magazine in the Alpha Omicron Pi Records is a binder of photocopied articles from the magazine, 1910-1994, highlighting the Delta chapter or written by members of the Delta chapter. Of special interest are a series of short articles from the November 1910 issue, including “History of Tufts College,” “History of Delta Chapter,” and “Customs and Traditions at Tufts;” the articles surrounding the 1949 Alpha Omicron Pi Convention, which was held just outside Boston in Swampscott, Massachusetts and staffed largely by Delta members; and an article from the Spring 1956 issue with a photo of Delta Audrey Hallberg dressed as Annie Oakley during her campaign for the Mayor of Tufts. Hallberg was the first woman to hold this “campus spirit” leadership position. Also of interest is the article in the Fall 1987 issue detailing the reestablishment of the Delta chapter at Tufts. 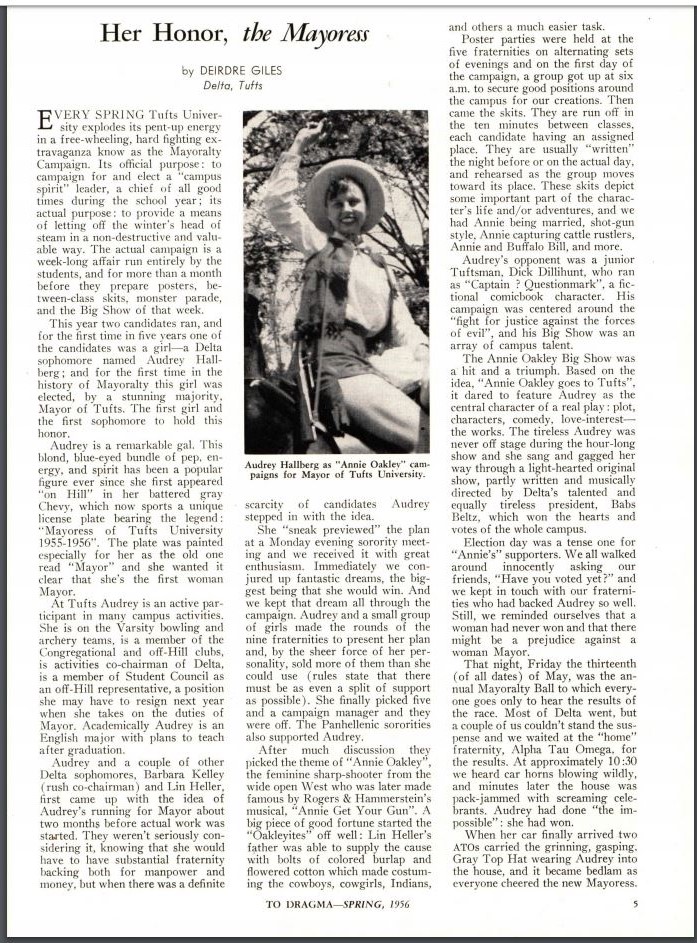 Records in this collection for the Delta chapter itself are richer after the chapter’s reestablishment in 1987, and include scrapbooks, videos of events attended or held by the Delta chapter, and administrative materials including a President's notebook, a PR notebook with clippings from the Tufts Daily, and new member materials. The scrapbooks date from 1988 through 2015, and showcase events and programs including recruitment and bid parties, philanthropy events, new member retreats, formal dances, and Big Sister Hunts. The photographs and themes of events also reflect what was popular with college students at the time... 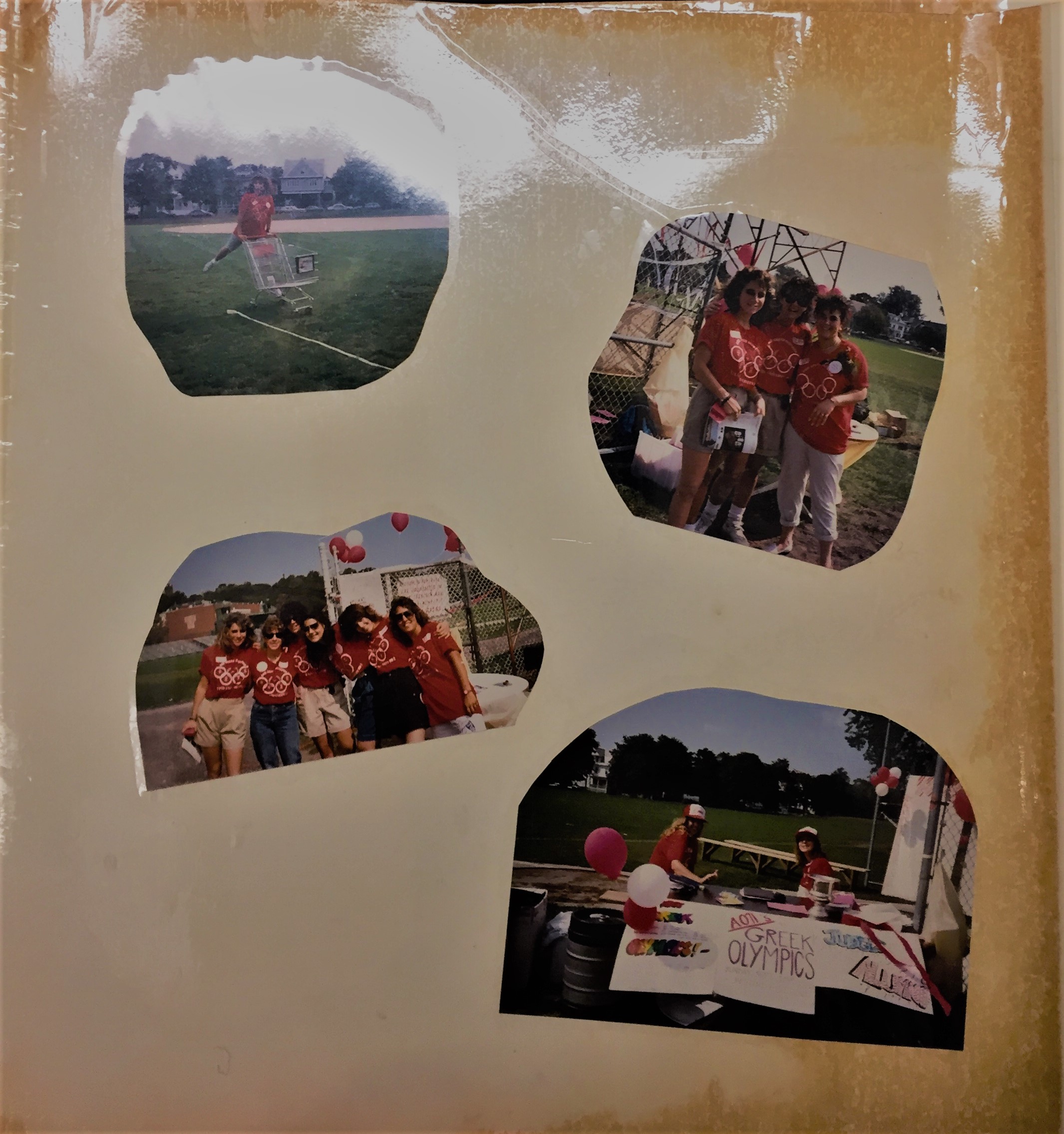 ...from big hair at the Greek Olympics... 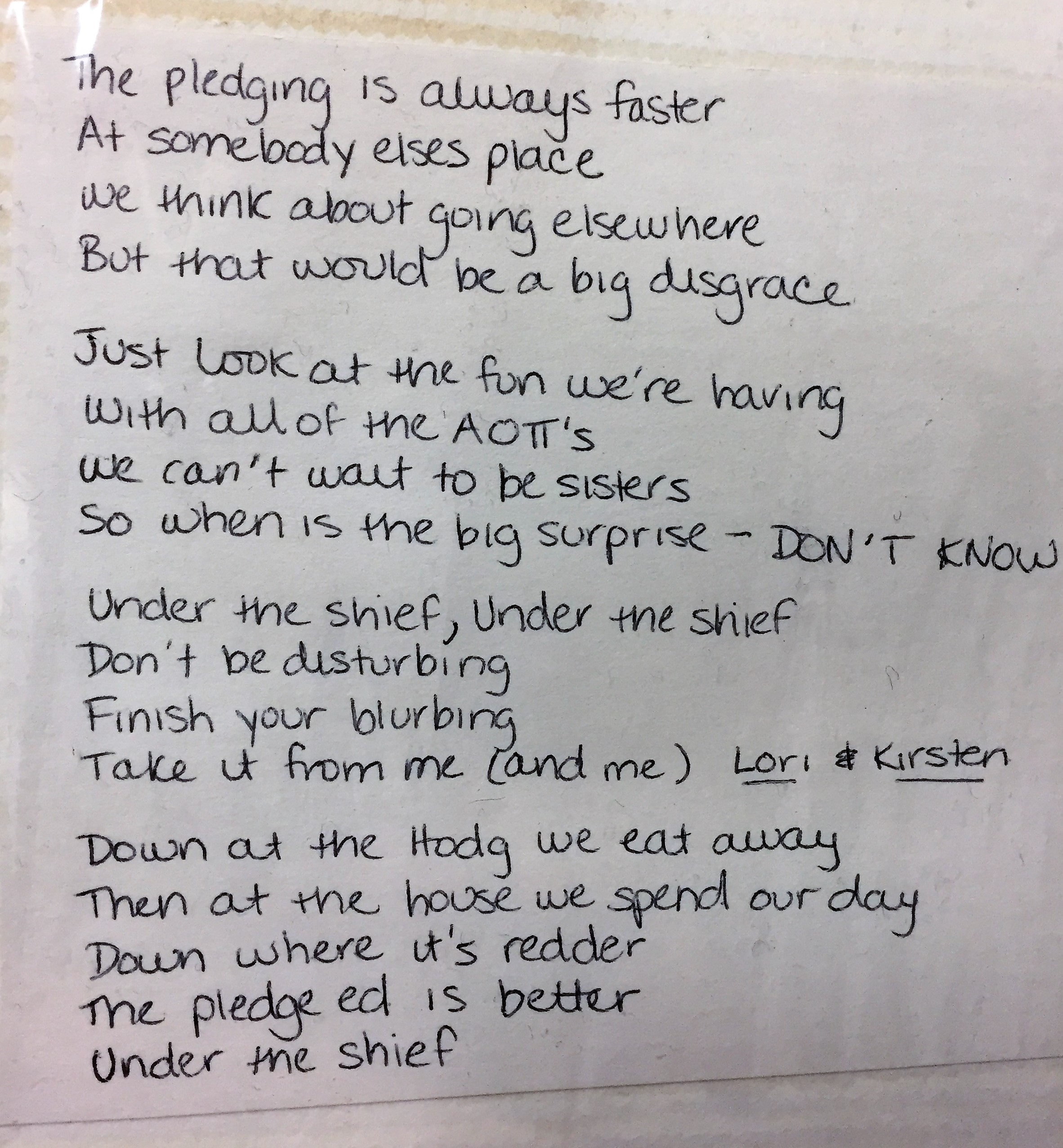 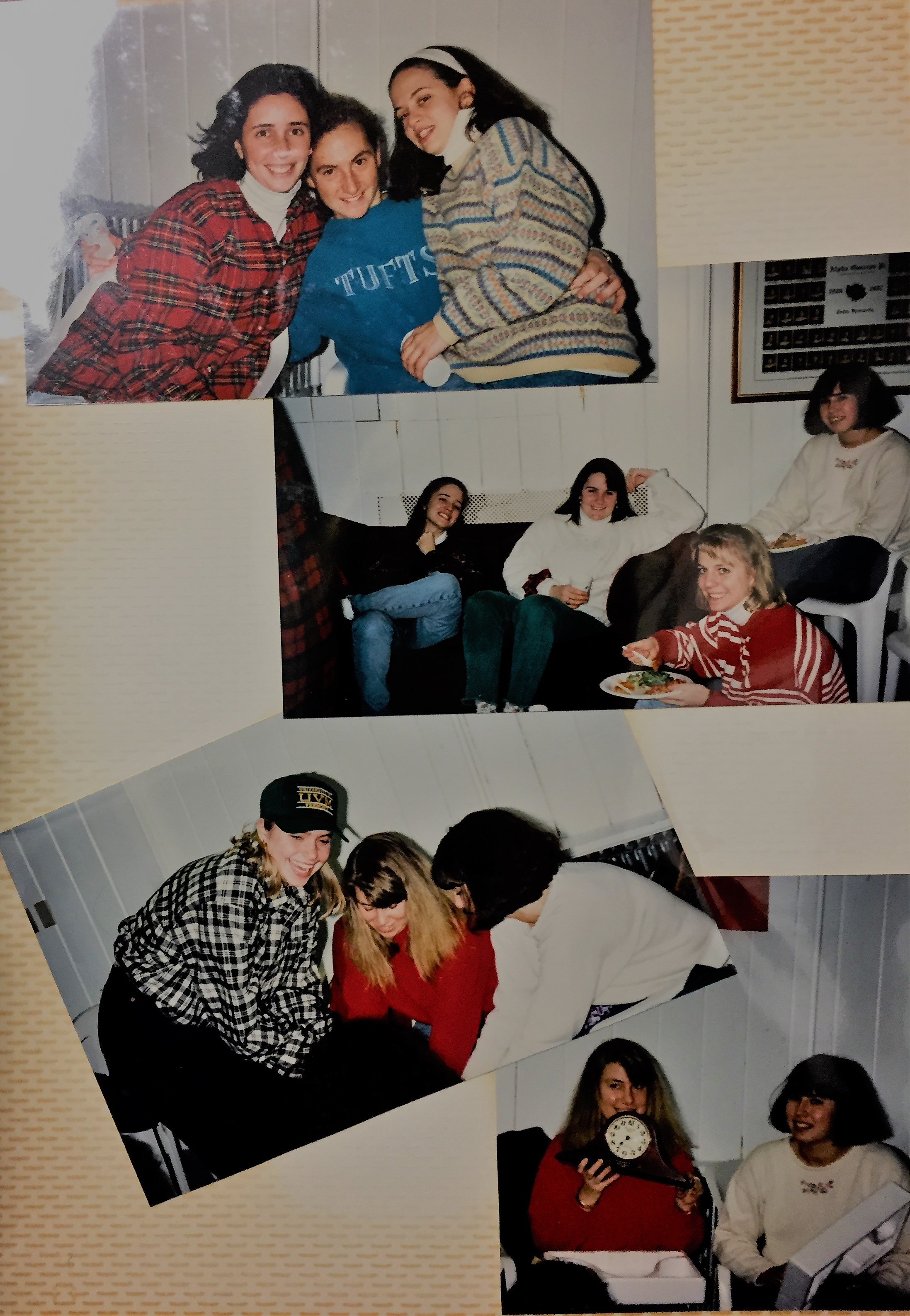 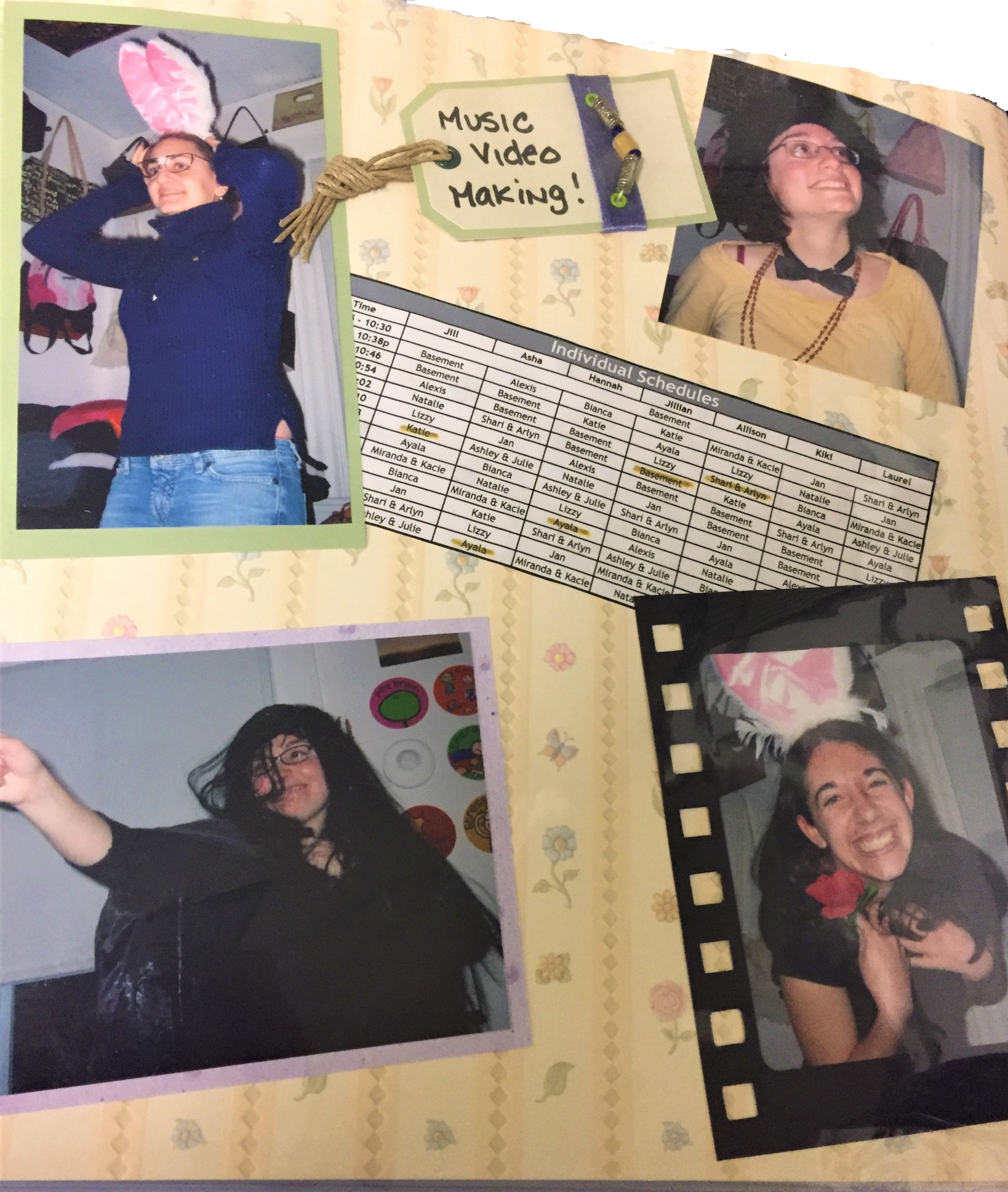 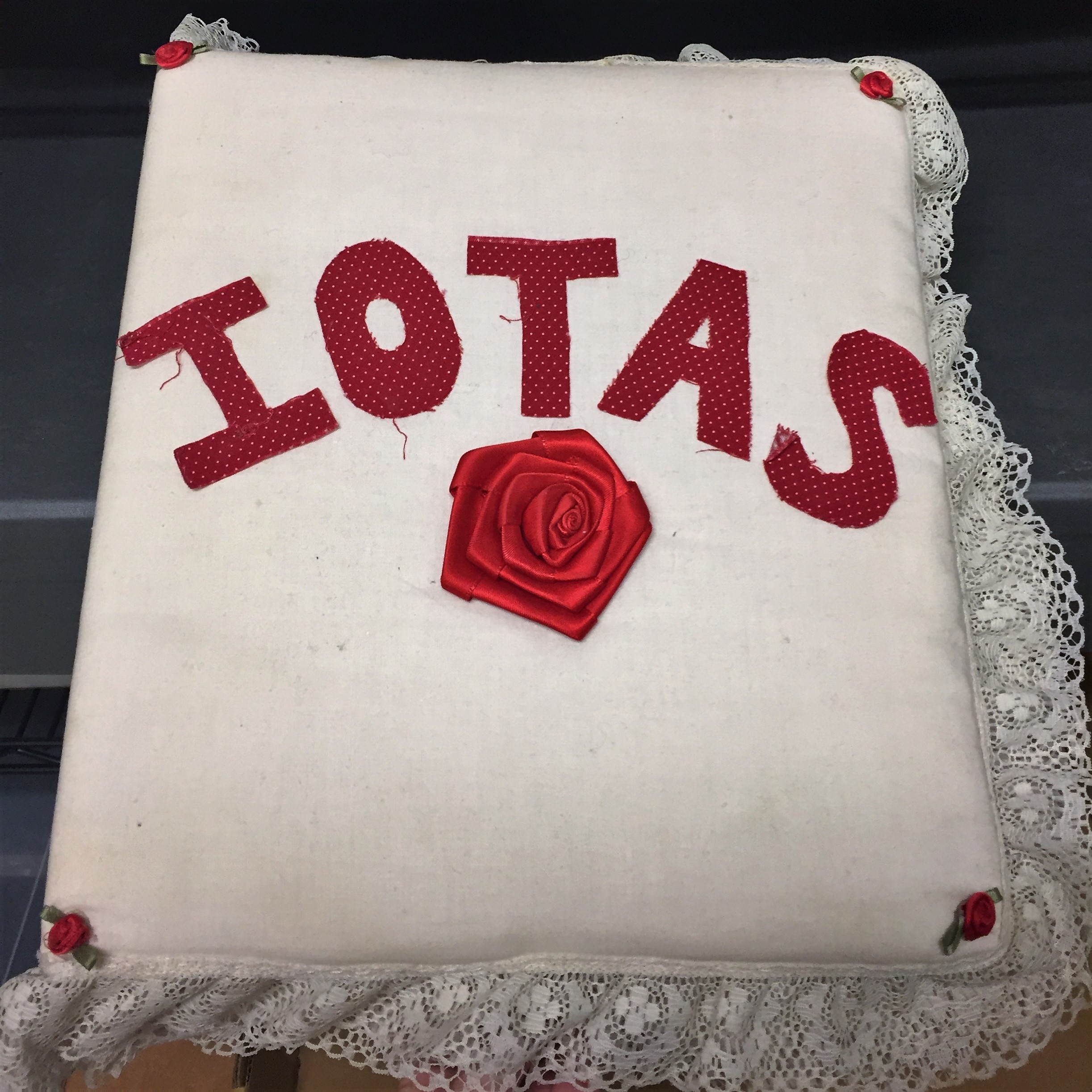 Many of the scrapbooks also have decorative... 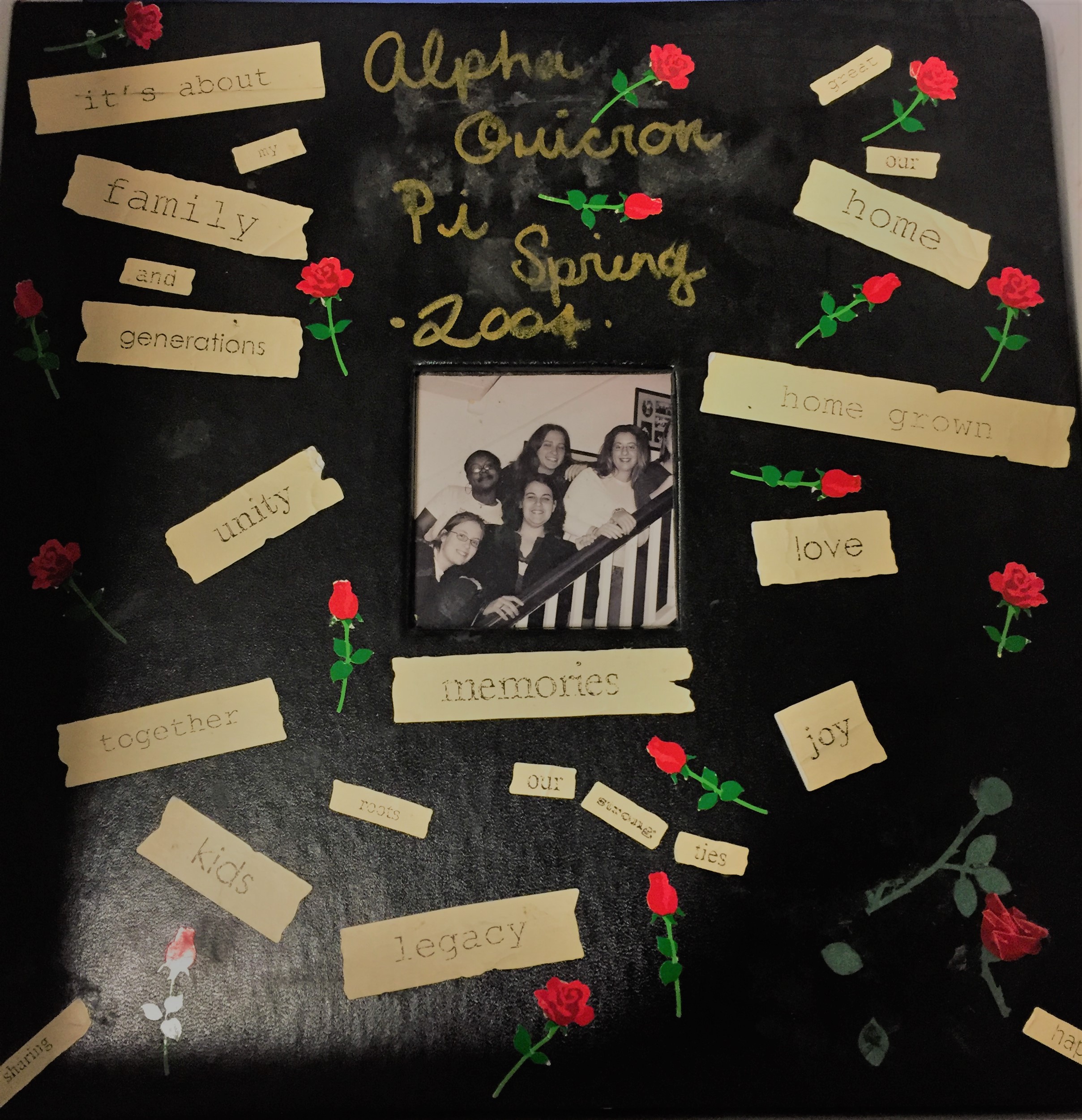 The Delta chapter participated in wider events and programming for Greek organizations at Tufts, and was recognized for effective leadership and commitment to social justice with the Tufts Mount Olympus Award—the award for Greek Chapter of the Year—numerous times between 1990 and 2017. The Delta chapter additionally received awards from Alpha Omicron Pi, including the Academic Development Cup, the McCausland Cup, the Sheaf Performance Award, and awards for outstanding public relations and outstanding reporting. These awards, in paper and plaque form, are part of the collection.