An Affectionate Look Back at the Affiliates

I’ve been working on the TAPER project writing histories of Tufts’ departments, and in the course of my research developed a fondness for the young ladies of the Tufts “affiliates” of the mid-twentieth century.
During World War II, when many of the male students were heading off to military service, someone at Tufts got the bright idea to partner with some Boston-based professional schools for women. The schools would be able to offer their students Tufts degrees (a Bachelor of Science in Education was created for this purpose), and Tufts would bring in some extra ka-ching. 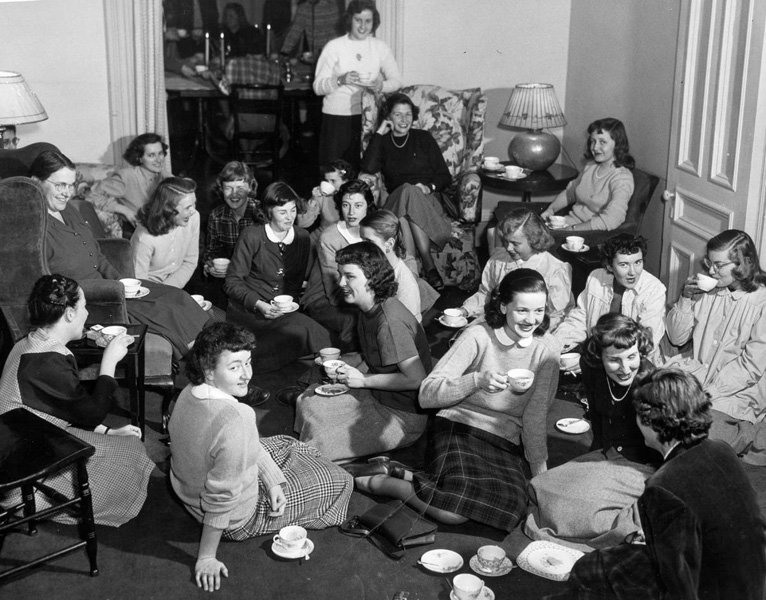 Nursery School Trainees having tea, 1949. A large number of young women, mostly sitting on the floor, drinking tea and grinning at the camera

The women’s schools in question were the Bouvé-Boston School of Physical Education (which also taught physical therapy), Boston School of Occupational Therapy, Forsyth School for Dental Hygienists, and the Nursery Training School (the School of the Museum of Fine Arts was, and still is, an affiliate, but wasn’t primarily a women’s school). The affiliates were part of Tufts’ Division of University Extension (later called the College of Special Studies). They had their own independent administrations, and the ones that moved on campus during the 1950s (Bouvé, BSOT and NTS) undertook building projects on their own, without supervision by the university.

We can get a feeling of what life was like for the budding gym teachers, occupational therapists, dental hygienists and teachers of young children from their course catalogs. The gym teachers seemed to have had a pretty good deal, with their month of June spent recreating at a camp on Cape Cod and their January at a ski lodge in New Hampshire. 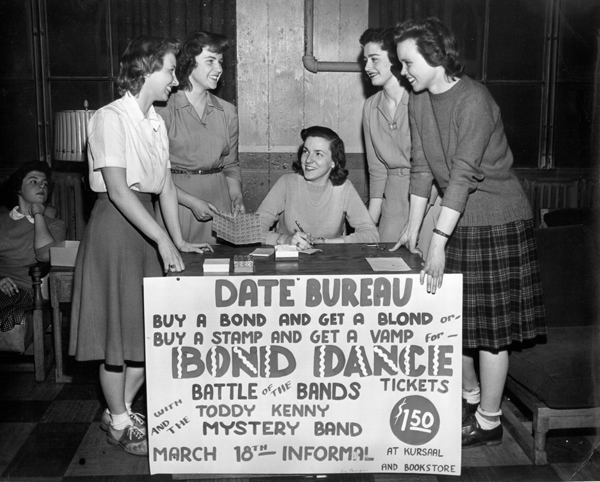 Selling tickets at Bouve School of Physical Education and Physical Therapy for war bond dance, ca. 1944. 5 young women posed around a table bearing a sign which reads Date Bureau. Buy a bond and get a blonde. Or. Buy a stamp and get a vamp. For bond dance, battle of the bands, Toddy Kenny and The Mystery Band

But it wasn’t all fun and games--the Bouvé catalog of 1943 emphasized ways in which these fine human specimens could contribute to the war effort, and beyond (“Every student … must learn to think things through internationally as it is her generation which will be largely responsible for making the world of the future free, joyous, healthful and a place of International Peace”).

But my favorite among the primary documents in the collection here are the yearbooks written by the BSOT students. Called Otiology, the yearbook chronicled the activities of the occupational therapy students as they commuted from their classrooms in Boston to their digs on the Tufts campus (where, one year, “Bsots were rated highest in poise and appearance at the Tufts Christmas sing”), and had reports from students who spent their Affiliate Year working in hospitals (one discovered that "doctors are actually people and dateable if young enough"). 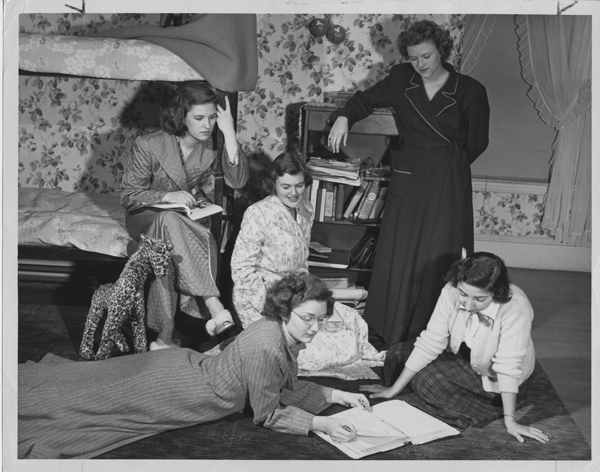 BSOT late-night study session, 1948. Five young women in bathrobes and casual clothes, one with a plush giraffe, gathered in front of bunk beds looking at a notebook

Still, the so-called Special Studies students did not have it so easy, in spite of those photos in the brochures where they’re happily chatting with clean cut young Tufts men. They were essentially ghettoized on campus, and didn’t fit in with the Tufts men or Jackson women. They had their own separate sections of liberal arts classes—presumably not as, um, rigorous. One sad indication of the officially sanctioned segregation is a 1961 petition protesting the administration‘s policy that Special Studies students not be allowed to eat alongside Jackson students in the new women’s dining hall.

Finally, during the early 1960s, Tufts President Nils Y. Wessell decided that the affiliate schools just weren’t up to snuff, and told them to either merge with the university or scram. The Boston School of Occupational Therapy became the Department of Occupational Therapy. The Nursery Training School, which had already become the Eliot-Pearson School, became the Eliot-Pearson Department of Child Study. Bouvé and Forsyth bid farewell to Tufts and changed partners, affiliating with Northeastern University.