Darn you, Tufts Digital Library! When I began looking for Tufts resources about the Great Depression (hoping to make some clever parallels to the current grim economic news), I was expecting articles about bread lines and unemployment. Instead, I found this fascinating 1931 photograph of medical students Shizue Komu and Ethel Hideko Omori. 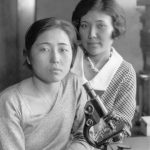 Further investigation led me to a number of interesting discoveries. I started looking further because our photograph was clearly miscatalogued due to a transcription error. Additionally, the women are labeled on the photograph itself as "Japanese girls", but web searches to confirm the mistaken name led me to evidence that Omori had been a premed student at the University of Hawaii in 1928. And now, thanks to the combined informative power of the Hawaii Medical Library's Archives and the Internet Archive, I learned that the Hawaii-born Omori received her degree from Tufts in 1935 before returning to Hawaii (via Japan) to become an OB/GYN. Along the way, I discovered that we have at least one more lovely photograph of these women, in which they look much happier, but which has not been scanned for our digital collections.

All of which is fascinating, except for four things. I got so distracted by this treasure hunt that I forgot I was supposed to leave the office over an hour ago; now I have a single photograph I'd like to add to the "to be digitized" queue; and tomorrow I will have cataloging that needs repairing. Plus, I just know I am going to go home and spend my evening trying to learn more about Komu.