We are redesigning the Tufts Digital Library and we need your help!

We are scheduling 30-minute individual interviews, by phone or in person, to better understand how we can improve your experience finding content in the Digital Library. No need to be affiliated with Tufts to participate in an interview. In person interviews will be conducted on Tufts' campuses in Boston, Grafton and Medford. Please contact Melanie St.James, (melanie.stjames@tufts.edu) by November 30. (We've extended the date, and this time we have put in Melanie's e-mail address correctly! Whoops.)

It has been noticed that masks were used in the country by ladies when taking horse exercise; in fact, it was a substitute for the modern veil; and, in previous reigns, it had been used generally out of doors. But in Anne's time it had got to be associated with disreputable females, so much so that at concerts, and at Powel's puppet show, no person wearing a mask was admitted. They were still worn at the theatres, but scarcely by ladies. Still they were worn sometimes even by them, on the first night of a play, in case there might be any allusion, which might afterwards be excised, which would make them blush. They were not expensive luxuries. 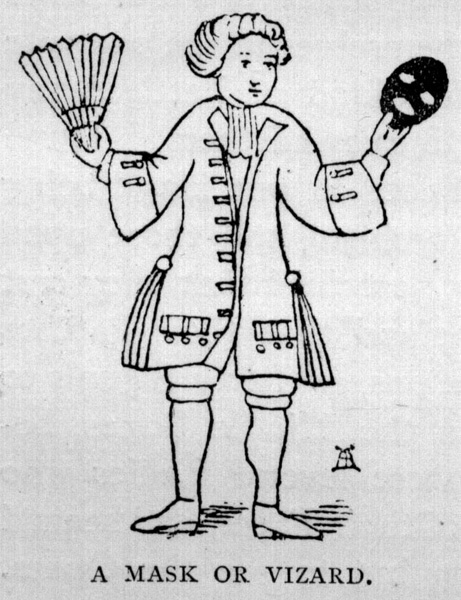 Seventeenth Century man holding a fan and a mask, labelled A Mask or Vizard

Seeing the class by whom they were worn, people having them on were naturally liable to insult. The following illustrates the manners of the time: 'An Arch Country Bumpkin having pick'd up a Frog in some of the adjacent Ditches, peeping into the Coach as he pass'd by, and being very much affronted that they hid their Faces with their Masks, Ads blood, Says he, you look as ugly in those black Vizards as my Toad here; e'en get you all together, tossing on't into the Coach: At which the frightened Lady birds Squeak'd out, open'd the Coach Doors, and leap'd among the throng, to shun their loathsome Companion.'

Apparently "vizard" is a Restoration face mask, related to the word "visor". As this quotation points out, they were once worn by "respectable" women (Samuel Pepys purchased one for his wife) but eventually became associated with prostitutes.

Whatever your costume and mask, enjoy Halloween!