From Tufts to the Academy

This year's Academy Award nominations were announced last week, but did you know that a Tufts alumnus is an Academy Award winner? In 1986, William Hurt (A'72) was awarded the Best Actor in a Lead Role Oscar for his work in Kiss of the Spider Women. Hurt didn't stop there. The following year he was nominated in the same category for Children of a Lesser God, and the next year received another nomination for Broadcast News! That makes this former Jumbo one of only nine actors to be nominated in three consecutive years in an acting category. Hurt's most recent nomination came in 2005 for Supporting Actor in A History of Violence. 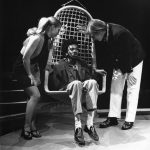