Hidden in the Archives

Recent events have gotten me thinking back to a previous post we did on subject headings, and on how hard it is to highlight minority groups within collections. The previous post dealt with primarily with identifying racial minorities, but even more difficult is representation of sexual orientation. In many cases, the sexual orientation of a person represented in a collection or image may not substantively add to the context of the material, but by not pointing it out, we as college archivists risk hiding positive representation of the diversity on our campuses.

A few years back, DCA had a researcher working on behalf of the LGBT Center here at Tufts who put together a website known as the Tufts Queer History Project. The Timeline the researcher created allowed for the highlighting of some of the materials DCA holds on LGBT history here at Tufts, but I know that I was disappointed that there wasn't more and that we had to look as hard as we did to find it. Also, the Timeline starts in 1969 - my guess is that Tufts had LGBT students, faculty, and staff before the 1960s, but we don't have the documentary evidence to show it. And what would this evidence look like if we did have it? As you ponder that question, take a look at one of my favorite images from the Digital Library. The picture is from 1980, and it says a lot about Tufts' history. It also makes me wish there was a companion picture from 30 years later where these students, now alumni possibly in their 50's, could come back for a picture on the Memorial Steps without the need to put bags over their heads. 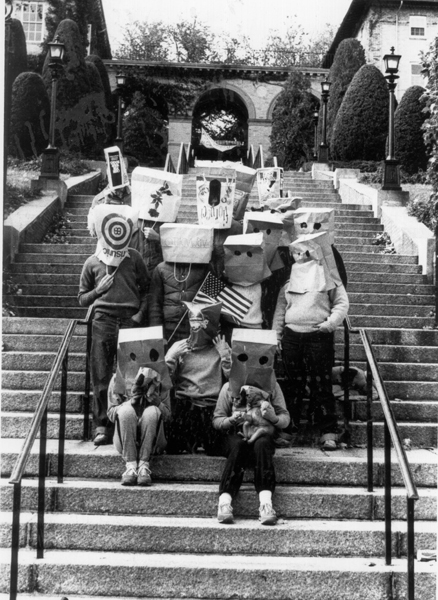 Members of the Tufts Gay Community sitting on the steps with bags over their heads, 1980