Inauguration, or a formal ushering in with auspicious ceremonies.

Pretty much everyone is aware that next Tuesday, January 20th, Barack Obama will be sworn in as the 44th President of the U.S.A. Perhaps fewer people have been thinking about Tufts presidents and their inaugurations, but the topic is worth considering...

Did you know that Tufts University has a special mace that is used in official ceremonies, such as presidential inaugurations and commencements? The mace was presented to Tufts as a gift of the Tufts Alumni Council and was first used in the inauguration of President Leonard Carmichael on November 4, 1938, as seen in the picture below. 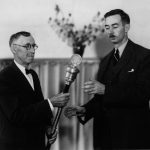 A mace is a medieval weapon consisting of a heavy staff or club, and ornamental versions of these, often carried before officials, have become symbols of authority. The Tufts mace is made rosewood and polished brass, and includes the official seal of the University as the finial.

Tufts has had 15 presidents through the current president Lawrence S. Bacow. The DCA holds the records or the Office of the President, which includes photos and memorabilia of Tufts presidents from the first president Hosea Ballou to John A. DiBiaggio.