A new Digital Collections and Archives exhibit, “Jumbos in Protest: Student Activism at Tufts, 1965-2015,” is now on display on the second floor of the Tisch Library, near the entrance of the Tower Café. This exhibit of materials from DCA’s collections highlights a variety of student movements that took place on campus in the past five decades. Over the last fifty years, Tufts students have organized to protest apartheid in South Africa, American involvement in foreign wars such as Vietnam and Iraq, and for an end to discrimination against women and LGBT individuals, among numerous other causes.

Protest and social justice activism has been an integral part of Tufts history from the school’s foundation in 1852. The Universalists who founded and supported the College were steeped in a tradition of abolitionist activism.[1] Remnants of Tufts College’s involvement in the anti-slavery movement are still visible on campus today. If you take a walk past the Cousens Gymnasium, you may notice a stone with a placard dedicated to George Luther Stearns, an ardent abolitionist and supporter of Tufts. Stearns was famous for being one of the “Secret Six” who financed John Brown’s raid on Harper’s Ferry.[2] 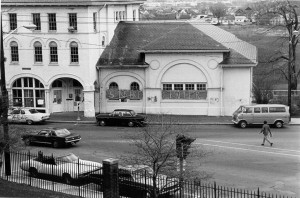 The standing display case features materials that cover the entire fifty-year span of the exhibit. Items range from photographs of the Vietnam War protests to rally flyers of anti-racist organizations. Some highlights of the exhibit are news articles about protests against the Gulf and Iraq wars in 1991 and 2003, a flyer from the Tufts Gay Community (TGC), and a list of demands from African American students in 1968.

The flat display case features items related to the anti-apartheid protests of the 1970s and ‘80s, as well as climate change activism of the recent past. The sit-in that took place at Ballou Hall this past spring happened almost thirty years to the day of a similar occupation by anti-apartheid protesters in 1985. Both events received extensive coverage in the Tufts Daily; articles from each sit-in are on display in this exhibit. 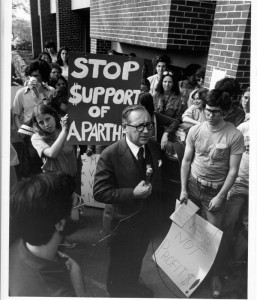 The exhibit was curated, designed, and installed by Dan Bullman, Archives and Research Assistant. It will be on display until January 2015. If you want to learn more about the history of student activism at Tufts, feel free to contact the DCA at archives@tufts.edu. You can also drop by our office on Level G of the Tisch Library from Monday-Friday 9 am-3:30 pm.