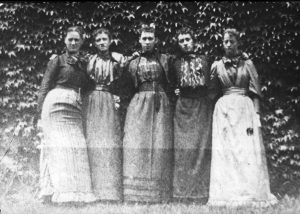 The history of women at Tufts College--it wasn't Tufts University until 1955--has many ups and downs. When the school was founded in 1852, many within the Boston-area Universalist churches that supported the school assumed women would be allowed to enroll right from the start. However, it wasn't until forty years later, in 1892, that the first women joined the ranks of students on the Hill.

The first female graduate was Henrietta Noble Brown. The daughter of mathematics teacher, Benjamin Brown, Henrietta started her academic career at Boston University, but transferred to Tufts during her junior year. She received a Bachelor of Arts in 1893 and spoke at the Commencement Ceremony. Her topic was "Some Aspects of Immigration." 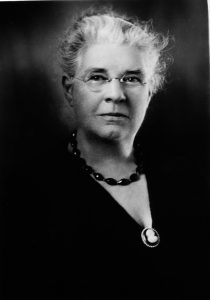 However, it was misprinted in the program as "Some Aspects of Imagination." Perhaps the typesetter thought imagination a more appropriate topic for a women than immigration. An uneasy calm existed between the male and female students on the newly co-educational campus. The women lived "down the hill" along Professors Row where the wives of faculty members could watch over them while the men continued to live in their dorms at the top of the hill (much closer to the classrooms and library). Starting in 1905, however, the calm was to be broken, in no small part due to the efforts of the new college president, Frederick Hamilton.

Hamilton, himself an alum, felt very strongly that both men and women were disadvantaged by a co-educational environment. His efforts for a separate school for women culminated on June 15, 1910 when the Massachusetts Legislature approved the charter for Jackson College for Women. The next day all women enrolled at Tufts College were automatically transferred into Jackson. While legally Jackson College still exists today, few within today's Tufts undergraduate community have probably heard of it. 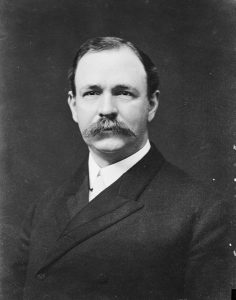 However, in the course of its one hundred years of existence, Jackson College has played a pivotal role in the lives of women attending the school. Its influence on the social and inter-personal environment available to women may be obvious, but more striking are the subtle influences its mere existence has had on the academic opportunities available to them. Starting in 1918, the faculty of Jackson College, which was also the faculty of Tufts College, created their first overtly gendered course of study: the secretarial course. The stated purpose of this series of classes was “to fit them to be intelligent, resourceful and competent secretaries for professional men: college professors, physicians, lawyers and clergymen.” Later, affiliations such as those in 1942 with the Bouve-Boston School of Physical Education which was also affiliated with Simmons College and Northeastern, in 1945 with the Boston School of Occupational Therapy which admitted only women until the late 1960s, and in 1951 with the Eliot-Pearson Children’s School, continued the trend towards feminized courses of study.