Digital Collections and Archives is pleased to announce a new exhibit in the lobby of Tisch Library here on the Medford Campus, drawn from our newly accessioned student protest posters collection. 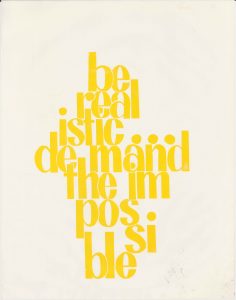 In April 2018, Digital Collections and Archives (DCA) was contacted by two residents of Metcalf Hall, Tufts students Vikram Krishnamachari (E19 Mechanical Engineering) and Chloe Amouyal (A20 International Relations). They had recently discovered that a long-sealed room in Metcalf contained what they called a “cool find” – protest posters, assorted residential life papers, and clothing from the early 1970s. They asked our staff to come and check out their find as soon as possible, as Metcalf is scheduled for renovation this summer and they wanted to be sure that this material was preserved.

Our archivists are pleased to report that Vikram and Chloe’s find is indeed cool and provides valuable evidence of student life at Tufts. These posters (only a small selection currently on display here) document Tufts students’ rich history of protest during the late 1960s to early 1970s, specifically around the war in Vietnam.

The posters are available for viewing in the DCA Reading Room, though processing of the collection will not be complete until Summer 2018. We will also be working on scanning all of the posters and making them available in the Tufts Digital Library (https://dl.tufts.edu). 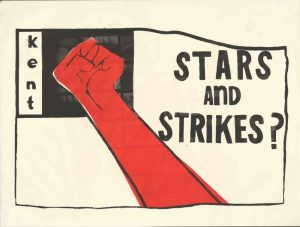 Tufts has a long history of student activism, but one of the most acute periods of activism ran from 1967 to 1972. Opposition to the Vietnam War was the greatest catalyst for student protest, but students also protested U.S. involvement in South Africa during apartheid, for increased representation of and support for African-Americans on campus, and for greater student involvement in the Tufts administration. Opposition to the Vietnam War also prompted student protests against military recruitment and against the presence of the ROTC on campus.

In the fall of 1969, students organized a one-day boycott of classes in opposition to the Vietnam War, and staged a work stoppage, organized by the Afro-American Society, to protest discriminatory hiring practices by Volpe Construction, the contractors building Lewis Hall. During the 1970-1971 academic year there were a number of demonstrations by students and student groups. At the Fletcher School, the office of Dean Edmund Gullion was firebombed in March 1971 in an apparent act of opposition to his open support for the war and the School’s close ties to the military, which had both been a frequent source of criticism from Tufts activists. Student protest began to decline after the 1971-1972 academic year, as U.S. involvement in the Vietnam War drew to a close.