Question: how should we redesign our digital library to make it nice for you?

(Warning: In linking to and quoting from our collection of books from 19th-century London, this post references terminology and attitudes around people with disabilities which we do not consider acceptable any longer. The words are still there, however. Be warned.)

One of my favorite new blogs is NARAtions the blog of the United States National Archives. One thing I love about this blog is that they ask readers for help answering some of the tough questions we all face. For example, their most recent post asks how to efficiently transcribe NARA's billions of pages of handwritten documents.

I'd like to take a page from their book (but not a handwritten page!) and ask you all for help. We are going to start the process of redesigning the user interface of the Tufts Digital Library to make it more useful and user-friendly for our users. Question: What features do you like to see to help you browse digital collections? 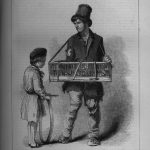 Universal design and accessibility have been huge concerns of mine. We've come a long way since 1861, when Henry Mayhew wrote in his London Labour and the London Poor, in the chapter entitled "Of the Probable Means of Reformation: "The blind--the cripple--the maimed-- the very old--the very young--all have generally adopted a street-life, because they could do nothing else." It's a lot less likely than it was 150 years ago for people with disabilities to be cast off from society as they were in Mayhew's London. The Americans with Disabilities Act (ADA), for example, has helped America integrate so those with and without disabilities can live and work alongside one another. In 1994, the Tufts Daily reports, the construction of the Tisch Library took the ADA into account to make a more accessible library for the entire university population. Still, it's not all unicorns and roses. As recently as 1996, another campus publication was complaining that the ADA made the campus less attractive with its requirements for accessibility. More importantly, the employment statistics for the United States population with disabilities are still dismal, and anything that lowers those artificial barriers to success is welcome.

One thing we can do while designing our new website is a focus on the principles of accessibility and universal design. This means not merely testing with adaptive technology and conforming to stable and emerging accessibility standards, but making sure the site provides a rich user experience for all users. Let's not have any more of the attitude we see in another volume of Mayhew's London Labour and the London Poor, when he writes of "Of the Crippled Street Bird-Seller".