The World According to Tufts: Class of 1991

By Katie Anderson
This summer, the Class of 1991 returns to the Tufts campus 25 years after their graduation. This exhibit, “The World According to Tufts,” aims to capture some of the elements that shaped student experiences.
Some obvious parallels emerged between this class and the other two profiled this year (Class of 1966, Class of 2006). War is an all too common theme. The Class of 1966 responded to the Vietnam War, while ’91 and ’06 both debated and protested conflicts in the Middle East. Women’s issues shared the limelight. “Take Back the Night” hit college campuses across the country, and a dialog around sexual harassment, consent, and safety coalesced. The Class of ’91 also navigated the AIDS crisis and LGB rights (transgender would not be added to the acronym until 1998). The Tufts LBG Resource Center would be established in 1992, shortly after the Class of ’91 departed.
In highlighting some Jumbo experiences, I didn’t want to exclusively focus on conflict and unrest. Luckily, the yearbook’s student staff compiled a fantastic yearbook in 1991, with page after page of quality photographs and thoughtful text. I looked upon the faces of these Jumbos twenty years my senior. So many smiles. So much silliness. I didn’t know any of these people, yet thumbing through one year of their lives felt deeply cathartic. Reunions are rooted in that catharsis, the tug of nostalgia and the unearthing of memories. Or perhaps just some sweet, satisfying revenge.
The Top Ten Favorite Tufts Traditions had some particular resonance. It seemed like an effective way to tailor the content to reflect the Tufts Class of ‘91, rather than the entire age group or the country at large. Whether you participate or not, you probably know your school traditions. By their very nature, they necessitate widespread recognition and easy transference from one class to the next. Furthermore, traditions are started and shaped by students, and that sense of ownership gives them more power than anything originating from the institution. 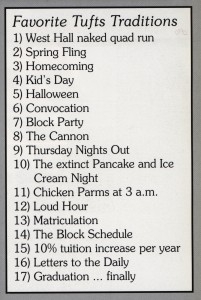 The most popular Tufts tradition perfectly illustrates this. No administrator dreamed up the West Hall Naked Quad Run (NQR). The chilly trot through campus took place every December as a way to relieve stress before finals. The NQR’s origins are admittedly a bit obscure. It had existed in a semi-organized form since at least 1981, and some Tufts alumni recall various groups streaking in the 1970s. In 1987, freshman year for the Class of ’91, West Hall became a co-ed dorm, and subsequently the NQR’s popularity grew immensely. Though the NQR eventually got the axe from the administration in 2011 amid safety concerns, it had been alive and well during the Class of ‘91’s tenure.
Another popular Tufts tradition, painting the cannon, is still thriving. The cannon, perched next to Goddard Chapel, arrived at Tufts in 1956 as a gift from the city of Medford and the Medford Historical Society. 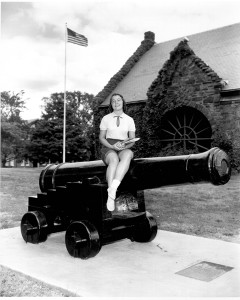 The cannon was believed to be an original from the deck of the USS Constitution until 1987, when it was discovered to be a replica while it was being moved. Since 1977, the cannon has been painted to raise awareness for campus and global events, and sometimes as a personal billboard. 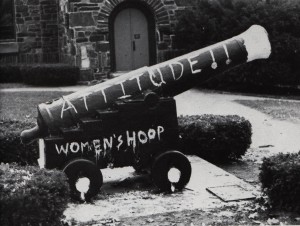 Another Tufts “tradition” further down the list employs some undisguised sarcasm to illuminate student grievances. At #15, the “10% tuition increase per year” was certainly unwelcome. Indeed, from 1987 to 1991, undergraduate tuition jumped 32 percent.
Reunion exhibits are not merely educational; we seek to evoke memories. It is challenging, and perhaps blasé, to attempt to capture an entire age group’s experiences, particularly one that began college before I was born. The Class of 1991 certainly did not arrive as freshmen with the same goals. Not everyone was politically engaged or participated in the same social events. Not everyone will remember the same activities, or as fondly. Our goal here was to recall a few key aspects of Jumbo life, and the viewer’s memories can take it from there, contextualizing these threads within their own personal experiences.
Sources:
“The Naked Truth: NQR’s History Marred in Rumor and Conjecture.” The Tufts Daily, 8 January, 2008.
The Tufts Jumbo – Volume 66. Medford, MA: Tufts University, 1991.
Sauer, Anne et al. Concise Encyclopedia of Tufts History. “The Cannon, 1956.” Tufts University. Digital Collections and Archives. Medford ,MA. http://hdl.handle.net/10427/14829 (accessed 28 March 2016).
Tufts LGBT Center. “Tufts Queer History Project Timeline: 1990’s.” http://ase.tufts.edu/lgbt/about/TQHP/1990s.asp (accessed 28 March 2016).
Tufts University Fact Book 1990-1991. Medford, MA: Tufts University, 1990.
Katie Anderson is a second year Master of Arts Candidate in History and Museum Studies at Tufts University.