On November 11, we honor military veterans by observing Veteran's Day. People serving in the armed forces have been an important presence at Tufts throughout its history, and the DCA is host to numerous collections that document that presence. 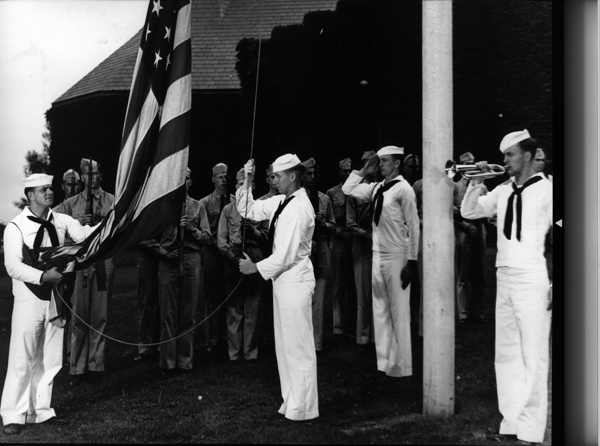 'Colors' on the Hill

In 1942, Tufts was one of eight universities granted a Naval ROTC unit, which allowed students to complete their college studies and receive military training prior to being commissioned in the navy. The Tufts Digital Library has numerous images of the NROTC from the NROTC/V-12 collection of memorabilia. DCA also has a collection of artifacts from the Tufts War Museum, which includes items such as medallions, coins, and shrapnel taken from soldiers' bodies! Other collections relevant to the history of veterans include the School for War Veterans records, World War II posters and publications, the Melville Munro collection's series on Tufts and the War and the War Years at Tufts, and the Atomic Veterans collection, which recognizes members of the United States Armed Forces and citizens who were exposed to ionizing radiation from atomic and nuclear weapons testing.

Tomorrow, Tufts honors veterans and those currently serving in the armed forces in ceremonies on Memorial Steps and in Ballou Hall.