(Sorry this blog post is so late! We had a seven-hour power failure last week that derailed lots of inessentials.) 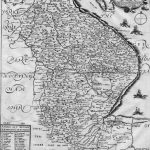 Last week, when Jen and I were fixing some special character problems in the digital library, we came across A Mapp of the County of Lincolne, with its divisions & Hundreds: or Wapontacks."Wapontacks"? Our prior experience told us this was surely a typo, so we enlarged the image to look closely. Sure enough, the map really did say "wapontacks"!

[a. ON. vápnatak, f. vápna genit. pl. of vápn WEAPON + tak act of taking (related to taka to TAKE). The late OE. wǽpenᵹetæc shows assimilation of form to native compounds like wǽpenᵹewrixle exchange of blows.

The recorded senses of the word in ON. are: (1) a vote of consent expressed by waving or brandishing weapons; (2) a vote or resolution of a deliberative assembly; (3) in Iceland, the breaking up of the session of the Althingi, when the members resumed their weapons that had been laid aside during the sittings. In English there is no trace of these senses, and the development of the actual sense can only be explained conjecturally. It is noteworthy that ‘wapentakes’, like ‘hundreds’, often received their names from some natural or artificial object (e.g. a barrow or a tree) which afforded a suitable rallying-place for open-air meetings. Assuming that in England wapentake originally meant the act of signifying assent at a public assembly, it seems not improbable that the men of the district whose place of meeting was (e.g.) at Osgod's Cross might be said to belong to ‘the wapentake of Osgod's Cross (Osgoldcross)’; the use of the word to denote a territorial division would thus be sufficiently accounted for.] 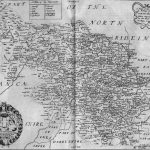 Try our Mapp of the West Ridinge of Yorke Shire: With its Wapontakes or Britannia: or a Geographical description of the Kingdoms of England, Scotland, and Ireland, with the Isles and Territories thereto belonging for a small subset of our collection of documents dealing with wapentakes, wapontacks, wapontacks, and hundreds.