You never know what you'll find in the archives . . .

As is well known, Jumbo the Elephant is the mascot of Tufts University. Jumbo is as storied in death as he was in life. But it was in death that he ended up a little, shall we say, dispersed. The skeleton ended up at the American Museum of Natural History in New York City. The skin was on display in the Barnum Museum on the Tufts Medford campus until it burned down in 1975. The tail and a few whiskers were saved; they had fallen off previous to the fire, and are currently in the possession of the DCA. And everyone on campus knows about the peanut butter jar of ashes taken from the Barnum Fire that resides in the Athletics Department. But what about the rest of Jumbo? Well today some light was shed on the final disposition of his heart.

Former DCA achives assistant Laura Cutter is now working for the National Museum of Health and Medicine in Washington D.C. They have a very active blog that highlights parts of their collections - largely correspondence. Lo and behold today's letter discussed the sale of Jumbo's heart in 1886! Frankly, I had never stopped to think about the rest of Jumbo. It turns out that the heart ended up at Columbia University. Granted, this information is on the wikipedia entry for Jumbo, but I had never bothered to look at it before. This tidbit of information led me to the Cornell University Division of Rare and Manuscript Collections where I found a finding aid for Jumbo material! The biographical note reads as follows, "Cornell University received the heart of Jumbo the elephant about 1889 in association with specimens acquired by Professor Burt Green Wilder. It no longer exists." I certainly can't fault Cornell for no longer having the specimen - they are tricky to care for and the research value of this item was probably pretty small.  Interestingly, a quick web search also turned up that most sites say Jumbo's heart was sold for $40.00, yet the price quoted in the letter is $30.00 . . . while the letter is not a final bill of sale, it is an interesting discrepancy between the documentation and popular belief.

The Tufts Digital Library has a wide range of photos of Jumbo. Here is one from 1889. 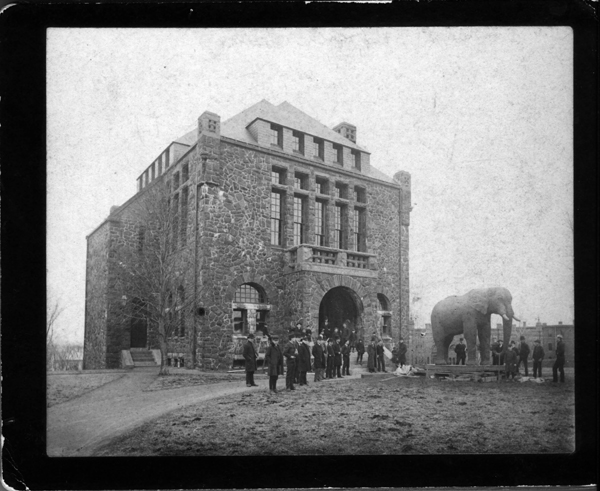