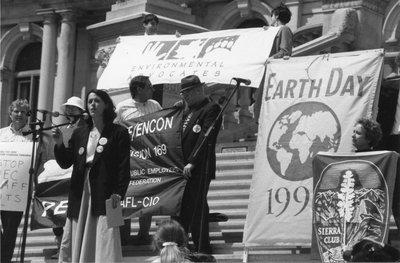 In recognition of the 50th anniversary of the first Earth Day on April 22nd, we are highlighting the papers of environmental activist Lois Gibbs as our current featured collection.

Born in 1951, Lois Marie Gibbs is an environmental activist and organizer who formed the Love Canal Homeowners Association after discovering that her entire neighborhood of Love Canal, Niagara Falls, New York, had been built on a toxic waste dump.

Gibbs had become increasingly concerned about her children’s health in the late 1970's. She read newspaper accounts of a landfill in Love Canal, noticed a pattern of health issues throughout her neighborhood, and began to investigate the problem on her own. She discovered that a field next to the neighborhood’s elementary school and homes had been a dumping ground for 20,000 tons of toxic chemicals.

That shocking discovery spurred Lois to lead her community in a three-year struggle to protect their families from the hazardous waste buried in their backyards. By trial and error, Lois and her neighbors developed the strategies and methods to educate and organize the community, assess the impacts of toxic wastes on their health, and challenge corporate and government policies on the dumping of hazardous materials. Her leadership led to the relocation of 833 Love Canal households.

Congress also passed the Comprehensive Environmental Response, Compensation, and Liability Act of 1980 (CERCLA), known more widely as the Superfund Act, in answer to the Love Canal disaster and the revelation of other hazardous waste sites that threatened health and safety. The CERCA Act was aimed at facilitating the investigation and cleaning up of abandoned hazardous waste sites by empowering the EPA to hold polluters responsible and to ensure their participation in addressing the issue. It also created a federal trust fund known as the Superfund to be used in the cleanup. Many of the residents of Love Canal moved their families to safer locations using the Superfund money, and Lois Gibbs became known to many as the “Mother of the Superfund.”

Gibbs continued her work by forming the Citizens Clearinghouse for Hazardous Waste in 1981. The national organization, which later grew into the Center for Health, Environment, and Justice (CHEJ), was founded with the purpose of helping people in situations like that of Love Canal organize at a grassroots level to fight to solve the problems in their communities. Lois Gibbs served as executive director.

She also published several books, including Love Canal: My Story (1982) and Dying from Dioxin (1999). In 1982 she was played by Marsha Mason in a made-for-TV movie called Lois Gibbs: The Love Canal Story. Among the honors and recognition she received for her work were the 1990 Goldman Environmental Prize and the 1998 Heinz Award. She was nominated for the Nobel Peace Prize in 2003. Gibbs was awarded honorary degrees from institutions including the State University of New York; Cortland College; Haverford College; Green Mountain College; Medaille College; and Tufts University.

The main focus of the Lois Gibbs papers is the Love Canal tragedy; the collection includes correspondence, photographs, flyer, notebooks and other material documenting Gibbs’ efforts to organize and mobilize the community in response to the crisis. Noteworthy elements include subject files from the Love Canal Homeowners Association, including by-laws, newsletters, and annual reports, and a grouping of materials Gibbs assembled to function as a Women’s Activist kit, consisting mainly of guides and handbooks focused on community organizing and environmental and social justice. Those resources also include items meant to inspire women to take action by calling attention to the achievement of female activists.

Also included are a limited number of audiovisual materials, namely 45 rpm records sent to Gibbs by two musicians who authored songs about the Love Canal, and ephemera including a pen and ink caricature (reproduced on this page) of Gibbs fighting toxic waste.

The Lois Gibbs Love Canal Papers were donated by Gibbs and Stephen Lester, the Science Director of CHEJ, in three accessions from 2011 – 2017, with the exception of some legacy files that were transferred to the DCA in the 1990s. Although most of the material is open for research, restrictions are noted in the detailed contents list in the finding aid.

Related Collection: The Center for Health, Environment, and Justice Records, 1942 – 2016. This collection consists of records for the group founded by Gibbs as the Citizens Clearinghouse for Hazardous Waste in 1981.