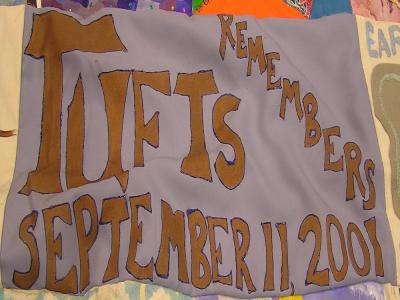 The decision to create the Patches for Peace quilt was made when a group of Tufts students and staff came together at Tufts Hillel on September 11, 2001 following the morning’s terrorist attacks. Their goal was to find community and support and to discuss how to respond. After a few hours, they had formulated a plan to create a Patches for Peace Quilt, seeing in it an opportunity to find a creative outlet and spread a message of community, peace and hope. With logistical and infrastructure support from Hillel, members of the Hillel student board invited many student groups on campus to participate by creating patches for the project.

Eighty-eight student organizations, varying widely in type and membership, contributed patches. Two groups, the Miller Hall RA Staff and The Observer, made last minute submissions and because of this their names were not included on the bronze plaque that listed the names of contributors, although their patches were incorporated into the quilt. Along with the patches from individual groups, the quilt was formed using two adjustable centerpieces explaining the project, reading ‘Patches for Peace – United in Hope’ and ‘Tufts Remembers September 11, 2001.’

Volunteers sewed the patches together and on November 7, 2001 it was exhibited for the first time. A banner ceremony was held in honor of the quilt, featuring Steven Grossman, former Chair of the Democratic National Committee and AIPAC, as speaker. In honor of their involvement with the Patches for Peace Project and related programs, Hillel received the international Hillel William Haber Award.

The quilt is part of the Historical Materials Collection. Along with the quilt itself, the collection also includes the commemorative plaque which reads:  "'Patches for Peace' was a campus-wide effort to respond in a hopeful way to the tragic events of September 11, 2001. Spearheaded by Tufts Hillel, 88 University organizations came together over the following months to construct a 96 square foot quilt that was unveiled on November 7th of the same year. The project symbolizes the united vision for peace the diverse members of the Tufts community share" and lists the names of participating groups. Additionally, the collection also holds the poster designed for the tenth anniversary exhibit in 2011. Patches were made available online through the Patches for Peace Conservation Project in 2011 and can be viewed in the Digital Library.